The lab is always at work. This week we were hyper-focused on the onboarding and training of new devs in order to advance the project at a more efficient rate. Our goal is to announce the Tokyo Trip winner this week! One of our citizens will be the winner of an amazing journey.

We have started some very interesting things with 3D objects, landscapes, and such. More exciting stuff like this is coming soon!

This week we will also be announcing the charities we will be partnering with thanks to the amazing #1776 sale a few weeks ago. Congratulations to Curate on the purchase and for their generous contribution!

Our Wasteland collection has entered post-production. This means we have approved the mixings and are now focused on quality assurance and making sure all traits are coherent and respect the integrity of our style!

Dev Team Updates: This past sprint, the Core team prioritized reviewing the new features added in scope for our “Minimum Loveable Product” (MLP) and began sharing the whole architecture & plan. In our last newsletter, we mentioned adding new developers and so, we spent some time earlier this week ramping them up and breaking down the user stories and tasks, so that they could start taking on work. With the new dev team members, we came up with 100 tickets/tasks after mapping out our new experience to be implemented. We’re really excited to work with these guys, many of them clearly having experience in the space already.

We have the social game split into a few different EPIC’s that will be taken up by our different back-end/dev team members.

Dev Progress: Early in the week we applied our first UI/UX design to the front-end and implemented the login experience. We also started working with a 3D game engine that can be run in the browser, But to respect the time it would take to implement a 3D engine we decided to use a 2D game engine in its place for the time being and will possibly be looking into a 3D game engine in the future. We also have begun building out some internal tools for us to control the game.

Currency Migration: You may notice this is a new “Epic” that has not been mentioned before. We are in the process of centralizing the capabilities of the existing DA Bot (The Merchant). This is so we can control the currency & features from the game and possibly use this currency in features that we have planned to be released after the MVP.

Website Upgrades: We onboarded our UI/UX designer BossyDog to support the Design team, and they’ve made a new brand design guideline for Divine Anarchy. Over the next few sprints, we’ll be prioritizing the game development, but also will be looking to improve our overall web experience!

Citizen Spotlight: This week we wanted to feature one of the OG DA holders CryptoMat. 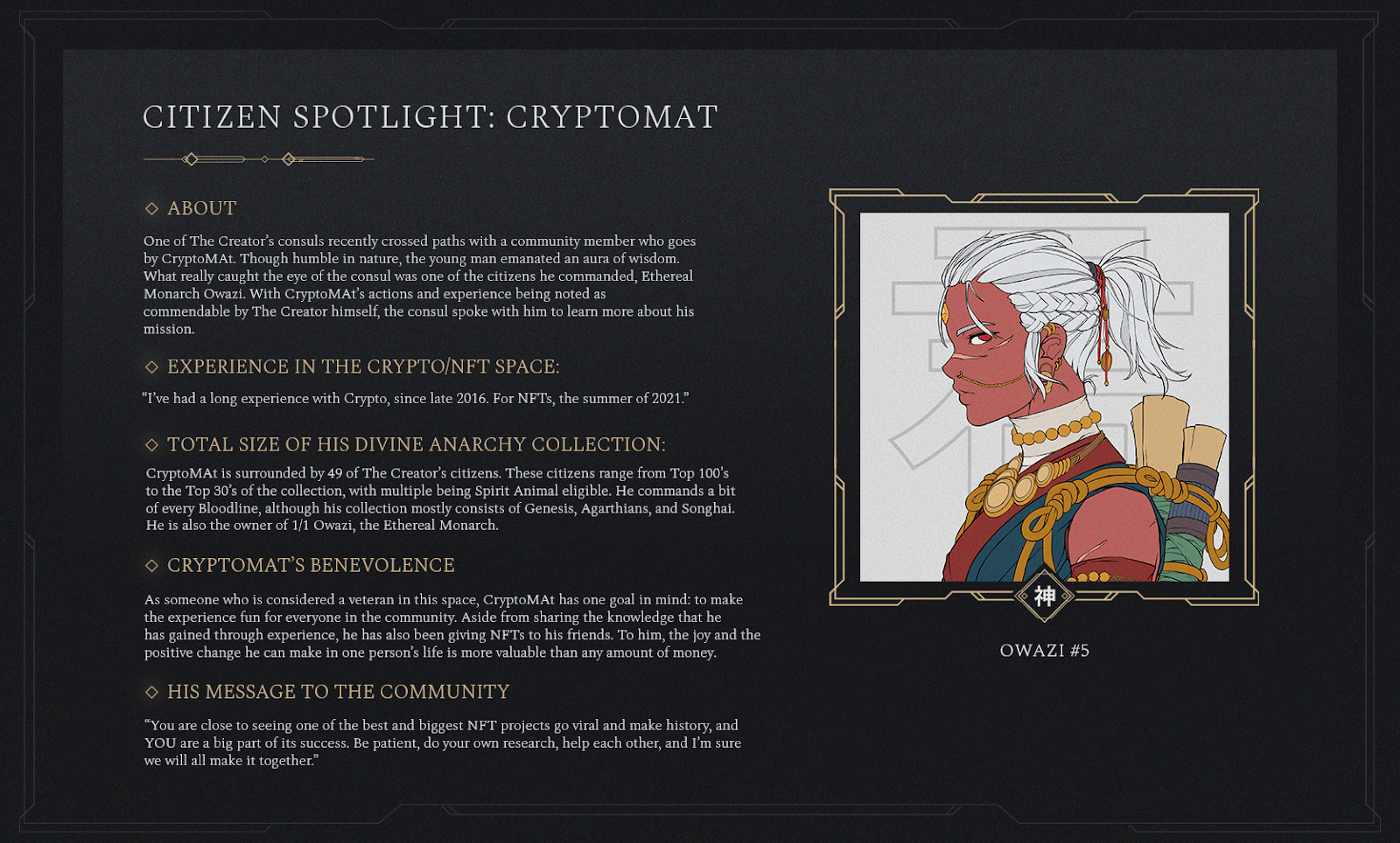 We are 4 days into the Government Wars and the Battle between The Divine Republic and The Sacred Hand is getting heated! Make your way to the Discord to check in with the leaders!

On Dec 19th we will allow the community to vote for the winners:

On Dec 20th the winning team of the very first Government Wars will be announced and receive their 200,000 coins prize!!

The winner of the 2-week all-expense-paid trip to Japan will be announced on Dec 15th.