Edition 7. ARE YOU READY?

We’re excited to share that we are on track for the end of this upcoming sprint 8 to deliver our MVP: The Divine Tribunal. However, due to unforeseen, real-life situations, some of the core team members will be traveling the upcoming weekend, so we have decided to push back the pre-game AMA to January 20th, and officially launch our MVP and game January 21st. This will also allow Assetbender and team enough time to get out marketing and press before game launch.

Dev Updates & Game Launch: This week there isn’t a whole lot to talk about. In our previous newsletter, we mentioned we pretty much have everything set up that’s needed to get things to work, so what we focused on this week was the actual UI… and wow, it’s always fulfilling seeing your creation come to life.

Earlier this week we were able to run the Tesla giveaway script as well, and in that giveaway, I mentioned doing an AMA. That AMA will be Friday, January 20th at 2 PM EST. I look forward to seeing you guys there. We hope this will be the day before the release of the game. So one of the major things we will be talking about in this AMA will actually be the future of DA after this release.

The major things we will be working on this week:

We had two designers working on game design and actually implemented one of them, however, the other designer we think did a better job so we will be switching out some of the existing UI for this new UI.

Music/Sound & SFX, in general, to make the experience more interesting (this can be disabled/muted)

*Something something* update (it’s a secret ;) )

Hooking up all the UI to the actual functionality that we previously wrote.

Deployment/server setup for the launch.

Website Updates: You guys may recall, but a couple of sprints back the design team did a complete overhaul and produced a new brand design guideline. This work has largely contributed to all new marketing graphics, and also the new website UI which will also be released in conjunction with the drop of the MVP. We can’t wait to show you guys the attention to detail and commitment to producing a visually compelling and exciting experience.

ZooDAO Partnership: We are excited to announce our partnership with ZooDAO! ZooDAO is a DeFi Staking platform for NFTs, where DA holders will be able to stake their NFTs to generate passive income in no-loss NFT battles.

You will also be able to stake DAI and use the yield of that DAI to support either your own NFT or other fellow DA holders. ZooDAO’s target launch is in 2022 Q1, and we will also be reviewing the contract to ensure safety to our holders.

We plan on integrating ZooDAO’s contract directly into our game for easy interactions between DA & ZooDAO.

To learn more about ZooDAO, check out their Litepaper.

In order to be eligible for the giveaway, you must own 3 NFTs (from mint or aftermarket.)

To learn more about our coin system click here: The Merchant

As mentioned in the last update, every week we will be offering 5 different Divine Anarchy NFTs to go up for sale in The Merchant from the official DA wallet.

This week the following NFTs will be made available for purchase with Divine Coins: 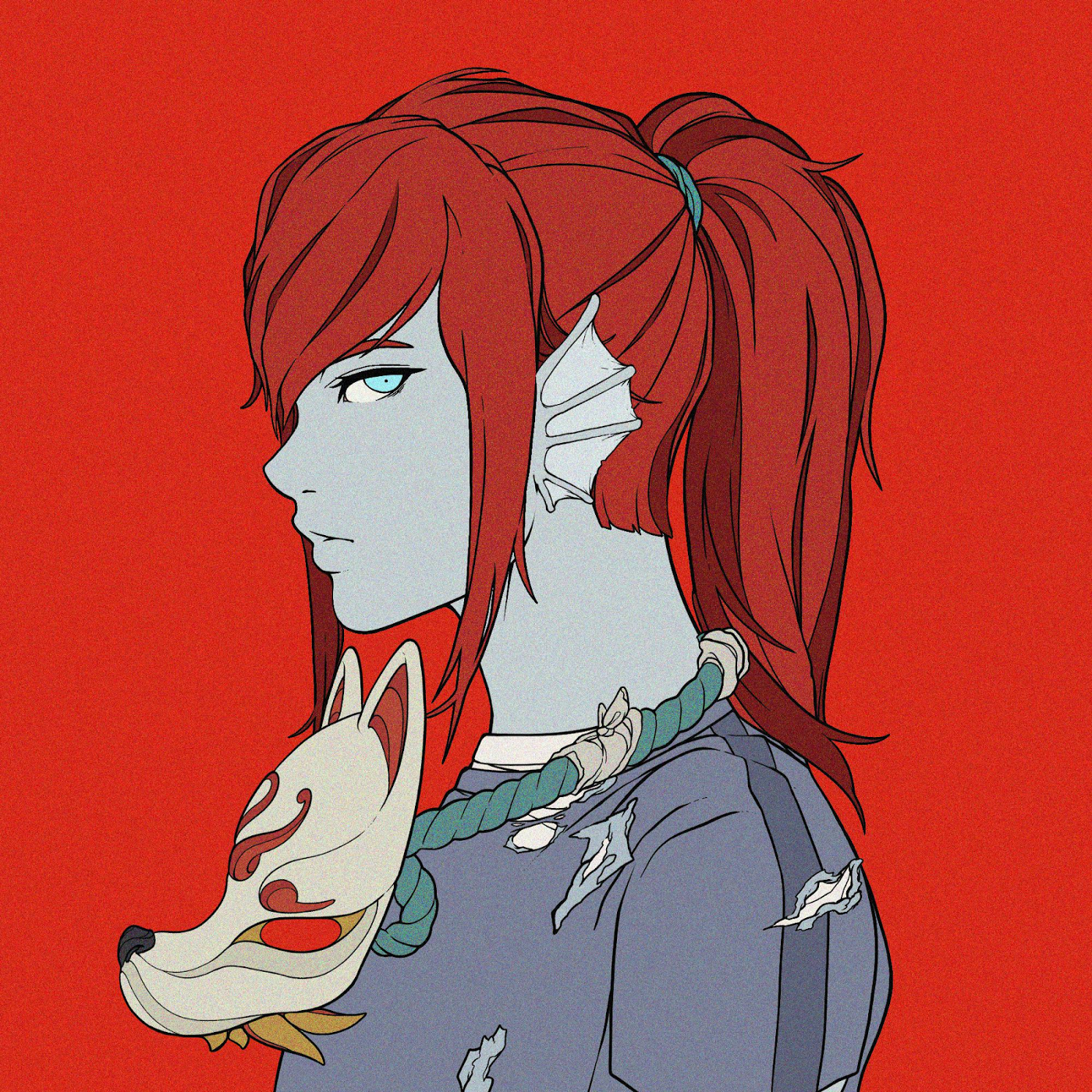 Tesla Giveaway: On Jan 3rd we did the biggest Divine Anarchy Giveaway yet where we raffled off two Teslas. The two wallets were claimed!

MikeCRC11 was extremely lucky! He purchased 1 DA NFT on Nov 7th for .298 ETH. With 48 tickets accumulated, this citizen managed to swipe the White Tesla! 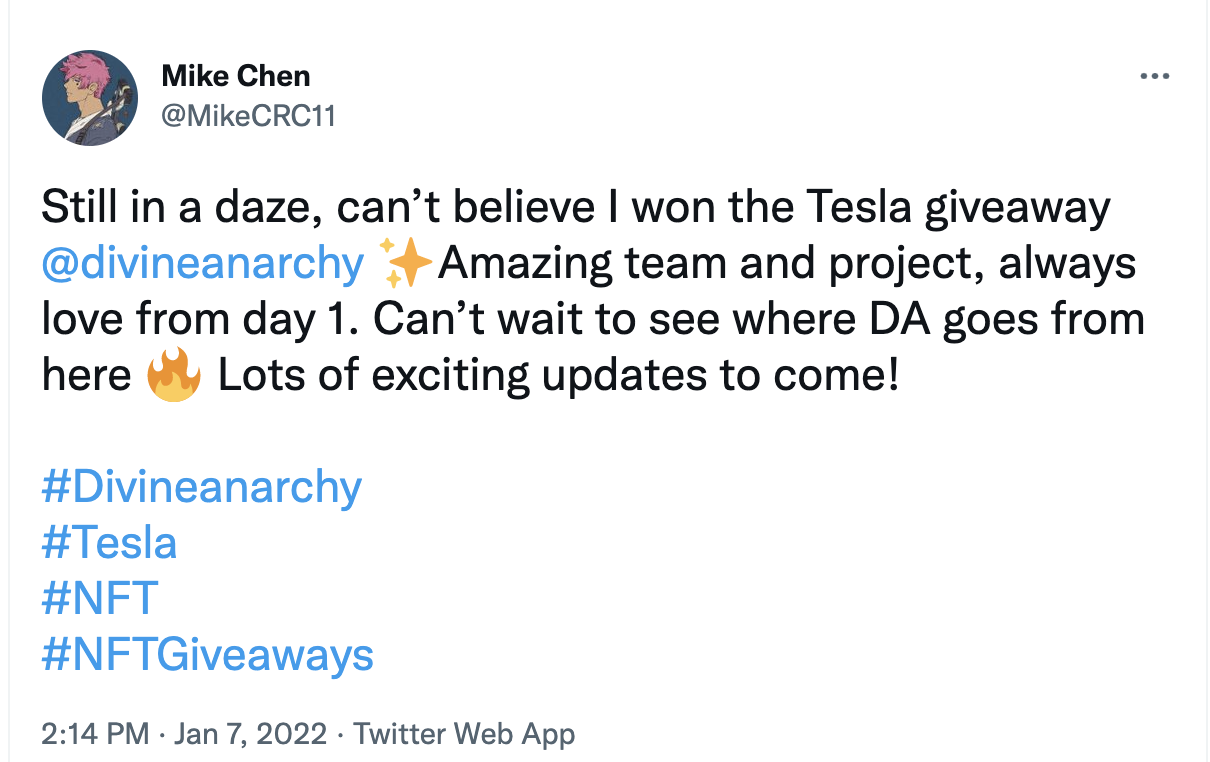 The winner of the Black Tesla minted 3 NFTs on presale and acquired additional NFTs on Nov 6th for .32 ETH and on Nov 10th for .65 ETH This citizen had 244 tickets and has been holding all his NFTs since purchase.

We are currently in the process of verifying the second wallet that won!

These auction funds, along with those of King Arthur, 100% go back into our Treasury Wallet to support the community and the project! Thank you to everyone that took part in the auctions.

Citizen Spotlight: Many talents, which come in various forms and mediums, have emerged within The Creator’s kingdom. This week, one of his consuls spoke with an individual known for their creativity throughout the community, S1eepy_Sheep#2159.

As an active and involved member of the Divine Anarchy world, S1eepy_Sheep is known by all as an impeccable storyteller. The consul spoke with S1eepy_Sheep in efforts to gain more insight into the mind and background of one of the community’s most prolific creatives. 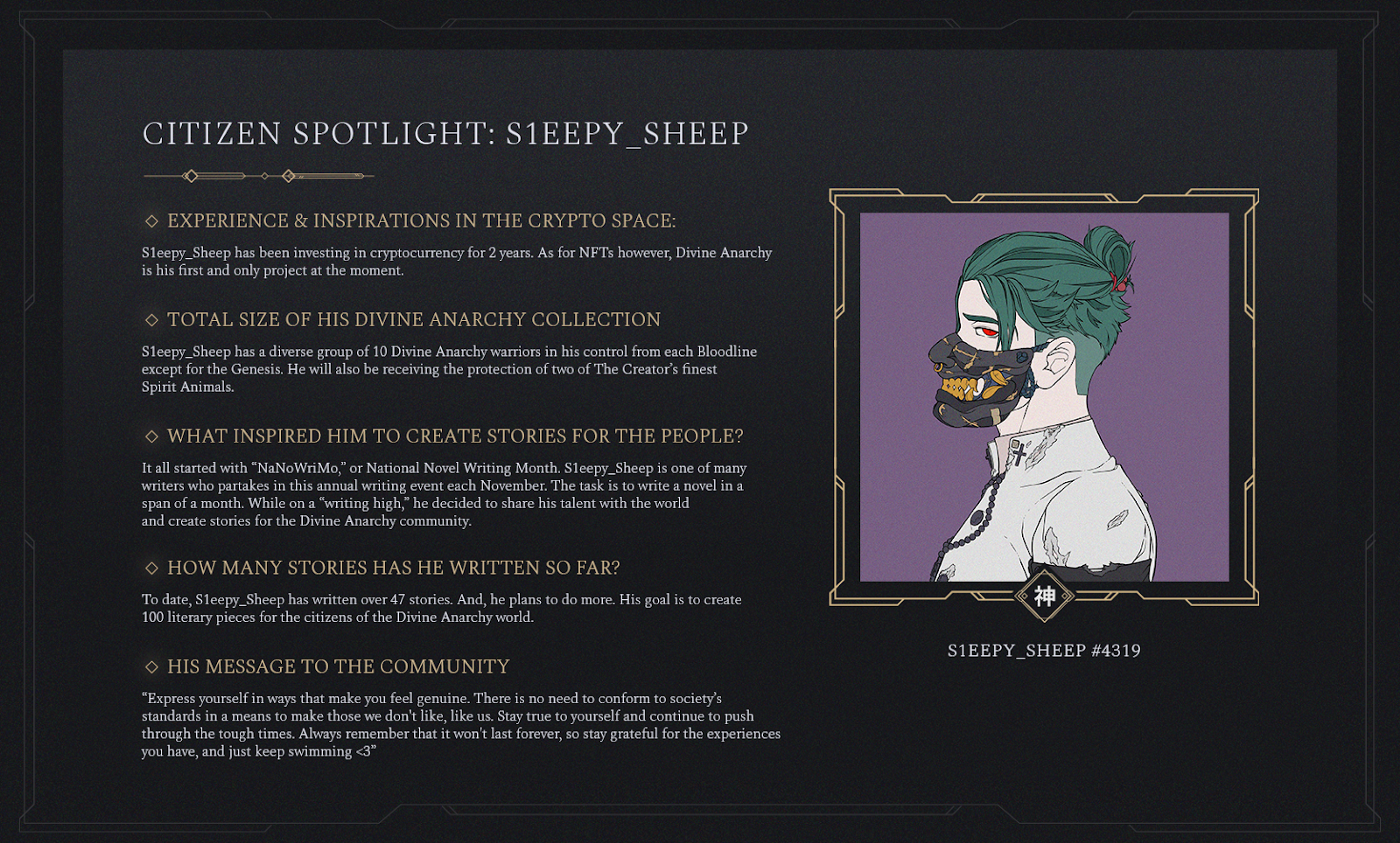 Ethereal Monarch Backstories: This week we published the epic backstory of Owazi and Poseidon:

Owazi: There came to be a girl born in the salt of the sea.

She yearned to illuminate the world; she sought to travel to the ends of the Earth and bring prosperity to her people.

Read the origin story of Owazi, Ethereal Monarch of the Songhai bloodline.

Poseidon: As water tore through the world during The Great Flood, one glorious kingdom remained untouched.

It was led by a sacred being. He was tasked by The Creator to ensure the balance of the world’s oceans for all of eternity.

Read the origin story of Ethereal Monarch Poseidon and his leadership of the Atlantean bloodline.
‍
https://divineanarchy.medium.com/poseidon-atlanteans-798f9dd0f3f0