In the years before the world’s waters washed through all of civilization, conflict was common among three of the original Bloodlines. The family bond between Songhai and Agarthian societies had gone sour. Meanwhile, Atlantean society had been captivated with a lust for rare resources, causing them to become contentious toward seafaring Songhai clans.

A rift had severed the fruitful relationship of the Songhai and Agarthians. And, it all began as a result of a single trading disagreement. Certain Songhai mercantilists, with the full support of their superiors, had begun price gouging in their trade of metals, hides, and medicines to the Agarthians. Some of these wares, unable to be found underground, had become essential for Agarthian society. While only a dispute between two trading networks, leadership quickly caught wind of the events. Representatives from both Bloodlines soon met, only for their negotiations to become increasingly hostile.

The rest was history. Songhai troops marched upon the underworld, where they were met by vast Agarthian armies. A brutal battlefield had formed at the precipice of the underground. This was where Songhai and Agarthian troops clashed, causing great bloodshed for years on end.

Below the ocean’s expanse, Atlantean society had progressed further into its clandestine brilliance. With their basic needs met, the Atlanteans placed a new priority on the acquisition of land resources. As controllers of the seas, they began to prey on Songhai trading vessels as their primary source, ambushing them at will. Some ships were merely looted, while others were ravaged and sunk.

News of this reached Songhai leaders, who demanded all future fleets be equipped with advanced weaponry to deter the increased Atlantean threat. Cannons, complex armaments, vats of incendiary oil, and more would be used to defend the Songhai armada. This intensified the strife by tenfold. The oceans were soon polluted by these frequent skirmishes, their waters set ablaze. Combined with the ongoing Agarthian and Songhai conflict, the entire world had fallen into turmoil.

The omniscient Creator, who observed each and every event of the world, grew furious. He watched as his creation spiraled into hatred, its once peaceful existence maimed with violence. For far too long, he had held his tongue. Witnessing the growing horrors of the world, the Almighty decided it was enough.

The winds stopped. The rains ceased. The oceans paused. A brief moment of silence seized the world as its smoky blue skies morphed white.

The stillness then shattered, The Creator’s deafening voice bellowing throughout the world.

“If you do not, you will be met with cataclysm.”

A gust of wind resumed nature’s elements. The fate of the world was now in the hands of each and every mortal.

The Atlanteans, who understood the implications of this divine command because of Poseidon’s sacred connection, halted all hostility. Their leadership heeded the words of The Creator, allowing all Songhai ships to traverse the seas unscathed. They retreated back behind the golden walls of their aquatic kingdom, disinterested with the rest of the world’s affairs. Peace returned to the oceans.

At the entrance of Inner Earth, The Creator’s demand did not sway the minds of the militants. While many Agarthians and Songhai denounced the war and resigned from their positions, others felt the stakes had become too high to forfeit. A portion of military commanders, soldiers, and mercantilists on both sides doubled down. Years of time, resources, and perceived progress were seen as insurmountable sunk costs. They saw victory as the only answer. The bloodshed continued, with peacemakers on both sides desperately trying to find a compromise. No such agreement was ever reached. Spiritual leaders in both societies would lead mass prayer ceremonies in attempts to negotiate with The Creator.

Secluded within the Gardens of Eden, the Genesis Bloodline had little knowledge of the events that occurred elsewhere in the world. As a Bloodline of supernatural origin and strength, petty conflicts between “lesser beings,” as they called them, were irrelevant. The people of the Gardens remained harmonious, embracing their ego and pompousness.

When The Creator’s directive echoed throughout the world, the Genesis were taken by surprise. Some speculated they would be immune to the disaster if it were to happen, as they were The Creator’s first creation. Others in the Gardens believed that the Genesis had a duty to intervene in global affairs and make peace. Indifferent toward the fate of other Bloodlines, they unanimously rejected the latter option upon further discussion. Instead, they turned toward The Creator himself, seeking clarity and communication.

After one year, nothing changed. The gruesome war at Inner Earth’s entrance had continued, reaching unprecedented levels of casualties. Prayer ceremonies among peace-seeking Agarthians and Songhai remained unanswered. The Genesis grew frustrated with The Creator. Like the other Bloodlines, he ignored their attempts at communication.

One day, the winds stopped once more. This time, vibrant skies mutated into charcoal darkness. The world went silent. Time was up.

The Creator’s voice cracked throughout the airwaves with fiery anger.

“You have failed me.”

“A lesson will be learned.”

Without a moment of pause, intensifying winds bombarded the earth. Vicious lightning splintered through the dark skies as thunder shook the Earth. A torrential downpour blanketed all of civilization.

Then, the ocean’s tides began to swell. 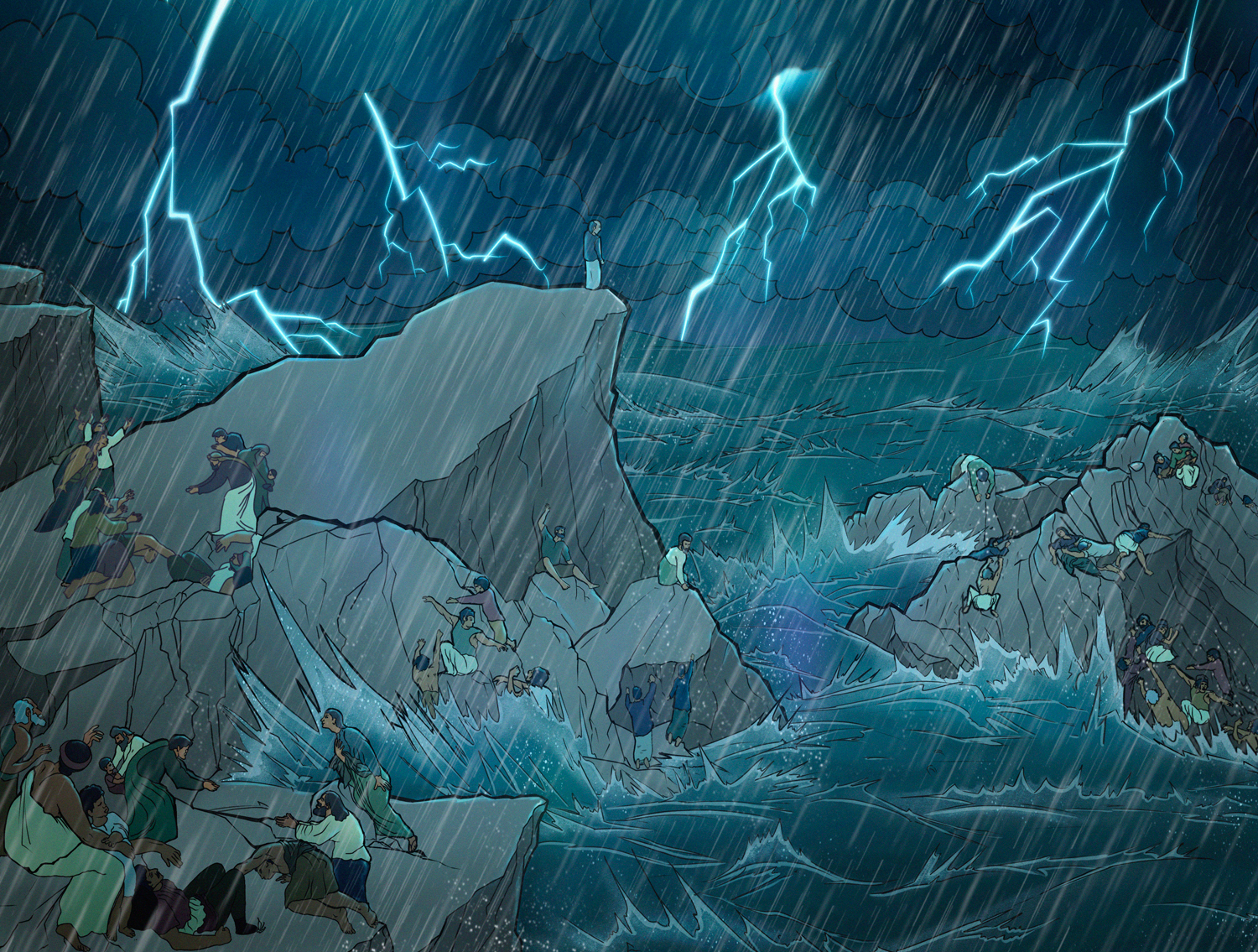